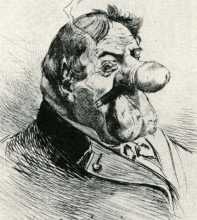 An accomplished engraver with a sharp ironic eye and a whimsical imagination, Maurice François Alfred Martin van Miële is better known by his pseudonym Martin van Maële. His mother, from whom he adopted the name van Maële, was Flemish, and his father, Louis Alfred Martin – himself an engraver and later a teacher at the Beaux-Arts school in Geneva – was French. Martin van Maële grew up in Boulogne sur Seine near Paris; mostly self-taught, he worked as a freelance illustrator in Paris and Brussels.

Martin van Maële married Marie Françoise Genet; the couple had no children. He died in 1926 while working on the illustrations for an edition of Aretino.