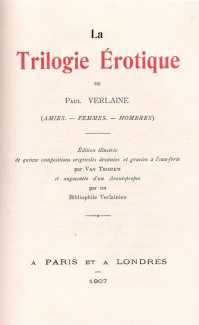 The fifteen plates, in which Verlaine appears as a character participating in a variety of the sexual fantasies painted in his poems, are wonderfully appealing. What is most striking about this suite is not only the realism and pathos of van Maële’s work, but also his innovative sense of humour.

La trilogie érotique was published ‘in Paris and London’ in a numbered limited edition of 225 copies.