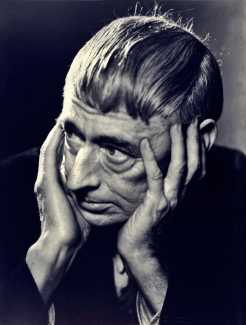 The Australian artist and writer Norman Lindsay was a free spirit in every sense of the word, his creativity displayed in painting, illustration, sculpture, cartoons, novels and children’s books. His output was vast, his energy enormous, and he took no cultural hostages.

Lindsay loved the human body, especially the naked female body, and ideally in bulk. Recognised during his lifetime as an important and sought-after artist, many of his compatriots found his preoccupation with joyful nudity hard to stomach.

The fifth of ten children born to an Anglo-Irish surgeon father and a missionary’s daughter mother, Lindsay married Kate Parkinson in 1900; they had three children, and divorced in 1918. He later married Rose Soady who was also his business manager, his favourite model, and the printer for most of his etchings; they had a daughter.

Lindsay’s frank and sumptuous nudes were highly controversial. In 1940 Rose Soady took sixteen crates of his paintings, drawings and etchings to the USA to protect them from the war. Unfortunately they were discovered when the train they were on caught fire; they were impounded and subsequently burned as pornography by American officials. Rose’s brother Lionel remembers Lindsay’s reaction: ‘Don’t worry, I’ll do more.’

The portfolios shown here include poetry collections by his friends, and the most important collection of his etchings, published in 1927. Many of his novels have a frankness and vitality which matches his art. In 1930 he created a scandal when his novel Redheap (supposedly based on his home town, Creswick) was banned , and in 1938 his Age of Consent, recounting the experiences of a middle-aged painter on a trip to a rural area who meets an adolescent girl who serves as his model and then lover, was banned. It was published in England, but was not published in Australia until 1962.

The Etchings of Norman Lindsay (1927)