Melbourne-born Hugh McCrae was a poet, writer, actor and illustrator who was first encouraged to make a living from his art by Norman Lindsay and his brother Lionel.

Lindsay and McCrae were lifelong friends, and Lindsay illustrated a number of McCrae’s volumes, including his first volume of poetry Satyrs and Sunlight in 1909. Lindsay said of McCrae, ‘his personality and his poetry have both become interwoven through the years with my progression through art and life; his imagery was so much in key with mine that the urge to illustrate his poetry was irresistible.’ 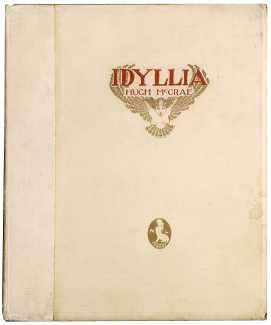 In 1922 Lindsay published fifteen of McCrae’s poems in a volume entitled Idyllia, and illustrated it with five of his extraordinary etchings. The book has been described as ‘the handsomest book produced in Australia’, a stunning collaboration between two noteworthy figures in twentieth-century Australian art and literature. The edition includes the five etchings What the Deer Said, Robin Hood, Pantera, The Yellow Lady, andThe Talking Breasts. The last of these is probably Lindsay’s best-known etching.

Idyllia was published by Norman Lindsay himself, in a numbered limited edition of 133 copies.