The only name that the expert on French erotica, Jean-Pierre Dutel, links with ‘Santippa’ is one ‘Georges Hoffmann’, but just as Santippa is a mystery so is Georges Hoffmann, for there is no known artist of that name either. There is, however, a real artist whose name and work appear to give us a series of very strong clues as to the true identity of the clearly talented creator of the mystery portfolios. 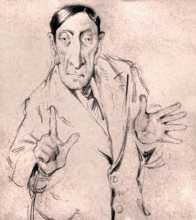 That artist is Gaston Hoffmann (1883–1977), a skilled and prolific painter, illustrator and caricaturist who worked in many styles from conventional genre painting and pen and ink portraits to wry cartoons. He grew up in Metz in north-east France as the child of a single mother whose surname he took, and his artistic talents were discovered early. He studied at the École des Beaux-Arts in Paris, and was a pupil of Léon Bonnat and Luc-Olivier Merson at the Julian Academy of Jules Lefebvre. From 1905 onwards he exhibited regularly at the Salon des Artistes Français and at the Salon des Humoristes. 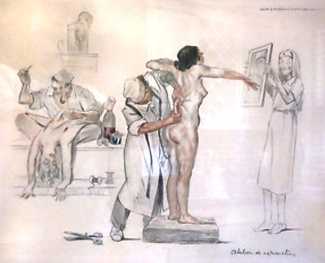 As well as the strong coincidence of being a ‘G. Hoffmann’, the verifiable work of Gaston Hoffmann often bears a strong resemblance to those signed ‘Santippa’. The real Gaston produced a series of humorous medical cartoons in the late 1930s, including one of early attempts at plastic surgery entitled ‘Atelier de réparation’ (‘Repair Shop’). Another cartoon speciality was courtroom scenes, especially those involving embarrassments of one sort or another. It isn’t hard to imagine the artist who produced these scenes also creating the ‘Santippa’ scenes.

So is the mystery solved? If you know more than we do we would love to hear from you.