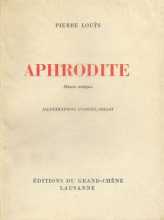 Given the popularity of Pierre Louÿs’ Aphrodite, it is surprising that it took until 1948 before Collot was commissioned to produce a set of illustrations for this classic tale. It had already been illustrated by Clara Tice in 1926, Serge Czerefkov in 1928, Mariette Lydis in 1932, and Bécat in 1937. Collot’s ten plates are more explicit than the previous versions, but are also less inspired; they feel more like an excuse to insert a little nudity rather than to illustrate the narrative,

Aphrodite tells the story of Chrysis, a courtesan, and the sculptor Démétrios, and is the classic theme of spurned love which turns into obsession and punishment, with the underlying message of the limits of mortality. Louÿs originally intended his novel to be published in a limited edition for his friends, but a glowing review by François Coppée in the Mercure de France, helped to no small extent by the libertine scenes scattered throughout the book, turned Aphrodite into a bestseller, inspiring artists, sculptors and composers to produce works based on the novel.

The Collot-illustrated Aphrodite was published in Lausanne by Éditions du Grand Chêne, in a limited numbered edition of 1000 copies.