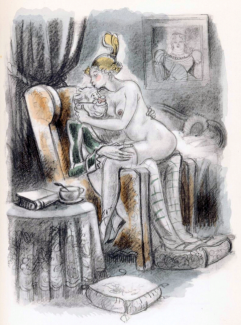 Alongside illustration, alcohol and sailing were Collot’s other main pleasures. He was a close friend of the popular writer Jacques Perret (1901–92), and when Perret won the prestigious Prix Interallié in 1951 he bought a small sailing boat, the Matam, and invited Collot to join him for a daring voyage from Honfleur to Santander. They only got as far as Cherbourg, but the shared experience found expression in Perret’s Rôle de plaisance (Doing it for Fun, 1957), wittily illustrated by Collot.

A complete annotated list of all the books illustrated by André Collot can be found on the Erotica Bibliophile website, here.