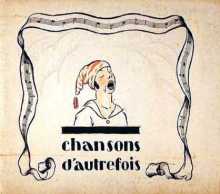 André Collot started his book illustration career rather innocently in 1921, with a privately-published collection of children’s rhymes, Chansons d’autrefois (Songs of Olden Days); his first mainstream commission followed five years later with an edition of Maurice Genevoix’ La bôite à pêche (The Fishing Box) for La Belle Édition. But Collot clearly had other things on his mind, as three rare and very limited edition portfolios from around 1927 demonstrate. It is likely that all three were published, or at least facilitated, by the prolific Maurice Duflou (1885–1951), who between 1903 and 1947 was the publisher, editor and printer of nearly a hundred erotic works, published anonymously without any printed publisher details, thus allowing him to escape prosecution for obscenity. Often illustrated, these works are now highly sought after.

Pierre Dufay, the editor of eighteenth-century writer Alexis Piron’s collected works, wrote of Piron’s Ode à Priape that it displays ‘le délire et le dérèglement d’une imagination de dix-huit ans’ (the delirium and disturbance of an eighteen-year-old imagination); it is not hard to see how the fantasies of a 22-year-old Piron and a 30-year-old Collot might combine to create an over-the-top celebration of the male organ in all its glory. 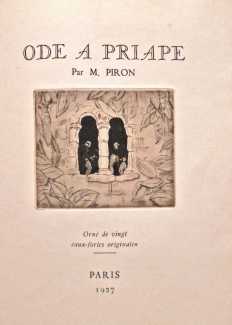 Ode à Priape is dedicated to the Phrygian god of fertility in Greek mythology, the son of Dionysus and Aphrodite, who was said to have huge genitals. It consists of a celebration of the sexual act, concentrating upon ejaculation and describing le foutre (ejaculate) as both the source of physical pleasure and ‘la source féconde/Qui rend l’univers éternel’ (the fertile spring that makes the universe eternal). Historical and mythological references abound, and the vocabulary is crude.

Described by Piron himself in the preface to his best-known play La Métromanie as having been written in a moment of ‘brief distraction’, the Ode was circulated in manuscript and seen by the procurer general of Dijon, provoking a scandal which was difficult to suppress and which needed the intervention of Piron’s protector, Jean Bouhier, president of the parlement of Dijon. Printed copies of the Ode including this one have tended to truncate it, giving only twelve of the seventeen stanzas, removing the most salacious.

The Collot-illustrated Ode à Priape was produced in a limited numbered edition of 350 copies.