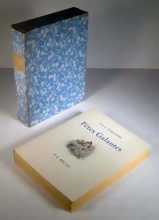 Paul Verlaine’s poetry was a perennial bestseller, and the last of several Verlaine collections to be illustrated by Paul-Émile Bécat was his Fêtes galantes. Published in 1869, this was Verlaine’s second volume, his first being the Poèmes saturniens of 1866. The twenty-two poems depict scenes of seduction and love banter between characters from the world of the Italian commedia dell’arte, set in an arcadian countryside.

It is the ‘safest’ of Bécat’s Verlaine volumes, but artistically accomplished nonetheless; we have included only nineteen of the 57 illustrations here, as they become rather repetitive.

The relatively large limited numbered edition of 2,700 copies was published by Le Livre de Qualite; the 200 de luxe copies included a separate suite of the illustrations in black and white.