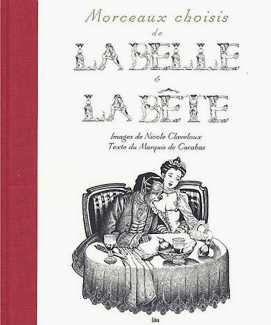 We all know the storyline. With her father’s freedom at stake, Belle agrees to become the fearsome Beast’s prisoner in his enchanted castle. Held as his willing captive, Belle must submit to the Beast’s most primal desires to survive. The Beast can’t let his precious Beauty go, not while there’s hope that she might be the one to end his decade-long curse, and with a true lover’s kiss return him to the prince he once was. Here is the archetypal story of a lover betrayed, a man deformed, and a castle shrouded in an enchantment.

La Belle et la Bête (Beauty and the Beast) is a fairy tale, but a particularly powerful one with its undertones of sexual awakening and the balancing of different aspects of power. In fiction the best modern retellings are those of Angela Carter, especially her version ‘The Courtship of Mr Lyon’ in The Bloody Chamber and Other Stories; in illustration it is undoubtedly Nicole Claveloux’s Morceaux choisis de la Belle et la Bête (Selected Titbits of Beauty and the Beast), with a text by ‘The Marquis of Carabas’ (an apt pseudonym for Charles Poucet). As well as the illustrations for the Morceaux choisis we have also included a few (the landscape images) from the family-friendly version for comparison.