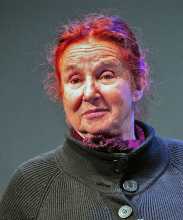 To English-language readers, Nicole Claveloux is best known as the author of The Green Hand, a collection of illustrated stories from the 1970s, considered by many to be among the most beautiful comics ever drawn – whimsical, intoxicating, taking her reader into lands that are strange but oddly recognisable, filled with murderous grandmothers and lonely city dwellers, bad-tempered vegetables and walls that are surprisingly easy to fall through. French children have much more choice, from Private Detective Grabote and Dracula Spectacula to classics like Alice in Wonderland her bold (and sometimes a little scary) illustrations have held their imagination since the first comic book she illustrated, Hop-là, appeared in 1971.

Nicole Claveloux studied at the School of Fine Arts in her native town of Saint-Etienne, in the Loire valley in central France. After her studies she moved to Paris, where she started working as an illustrator in 1966. Her best-known character, L’insupportable Grabote, appeared in 1973, published by Harlin Quist. In 1976 Claveloux created ‘Planche-Neige’ (a play on Snow-White or Blanche-Neige) for the feminist magazine Ah! Nana, and started contributing regularly to the comic magazine Métal Hurlant. During the 1980s she published a popular range of books for younger children which she wrote and illustrated, including Tout est bon dans le bébé (Everything in the Baby is Good) and Histoires de clounes (Clown Stories). In 2005 her modern fairy tale Un roi, une princesse et une pieuvre (A King, A Princess and an Octopus) won the Junior Prix Goncourt.

But there is another side to Claveloux’s skills, which first appeared in print in 2003 with an adult version of Beauty and the Beast, which she was at the same time illustrating for a children’s version. Two other highly original and imaginative volumes appeared – a dark Parisian tale set in the 1900s, and a collection of fairy tales, myths and legends. During the same period she produced some striking landscape-style paintings, at the same time sexually explicit and sensually compelling, a selection of which we have included here. 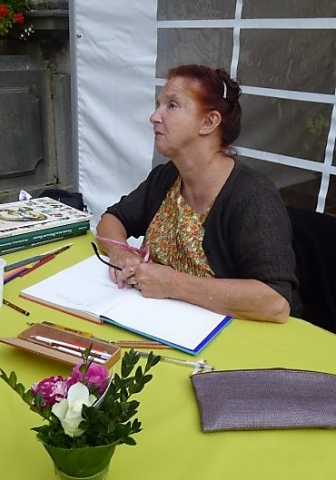 It really just happened, without me making a big decision about what to do next. It was a sort of desire I had had for a while. I worked on them alongside my children’s books; in fact Professeur Totem et Docteur Tabou appeared between the two erotic books. I don’t see the two genres as completely separate; the themes mingle. In 2001, I illustrated Beauty and the Beast in the original text by Mme Leprince de Beaumont (published by Éditions Thierry Magnier), and it made me want to continue, using the same two characters and telling their intimate adventures, but this time for adults. I’m not the only one to do this; many illustrators have practiced several genres simultaneously, for example Feodor Rojankovski and René Giffey.

Each of the books has text by a person who hides behind a pseudonym – the Marquis de Carabas and Maurice Lerouge. Do these people really exist?

The Marquis de Carabas and Marcel Lerouge are one and the same person behind these pseudonyms, one borrowed  from Charles Perrault’s Puss in Boots, the other parodying the name of a author of a well-known early twentieth century novel. The author (actually Charles Poucet) and I work backwards – I draw scenes according to more or less vague ideas, and when I have accumulated a certain number I pass everything on to him; he then puts the images into an order, builds a story, and writes his text to correspond with my drawings. That’s the opposite of what I usually do, and it’s a very pleasant way to work. Sometimes we complete the story with a few additional drawings to bridge between scenes.

The character of Monte-en-l’air was inspired by one of these heroes of soap operas at the end of the nineteenth century that I find so attractive. I have always liked the image of the Phantom in evening dress above Paris, the original version without the hood, the posters and covers of novels with heroines like Irma Vep, and heroes in opera hat, cape and tuxedo, theatrically lit. These characters are not always very erotic; they are too busy with revenge. But I disagree with you, Arsène Lupine should inspire erotomaniacs! In each story he seduces a woman, exchanges information about difficult cases for the promise to sleep with him.

The images in the two books are frankly pornographic. There are references to sexuality and eroticism in your earlier work, but here they are tackled bluntly. Why did you wait so long?

Over the past twenty years I’ve slipped more and more naughtiness into some of my drawings, and especially into my paintings. I think it’s down to personal evolution. Desires seem to arrive when they want to, or when they can – I don’t do much deciding, I just receive, that’s all. I’ve always liked to draw funny fairyland-like people, so I worked for a long time for children. But there are different periods in our lives, times when we are ready. I can’t be more precise.

Confessions d’un monte-en-l’aire seems more elaborate than Beauty and the Beast, with more detailed work, especially in the Parisian architecture. Did it just come like that or are there artistic choices behind it?

Beauty and the Beast had a fairly simple scenario: two heroes in a unique setting, a park and a castle, all in a more or less whimsical eighteenth century. Confessions takes place in a more complex world: the hero meets all sorts of different characters, in a new place each time.

I wanted the urban adventures of the monte-en-l’air to take place in compelling settings; this mysterious 1900s Paris needed twilit or stormy lighting, rain and wind, angled perspectives, old houses nested one inside the other, where the hero can flit from roof to roof, appear through hidden doors, and disappear at will. I like the details, the small things seen in the distance through a window or in a mirror.

I quite understand that there are many people who are not particularly interested in sexual stories and images, and it seems correct to me not to inflict them on everyone by displaying them on subway corridors. Other than that, I hope that no censorship of images will ever be imposed, that it will always be possible to represent our sexual fantasies.

Your illustrations show a wide range of sexual possibilities rather than concentrating on any particular practice. Does this say anything about yourself?

I didn’t want to make any sort of inventory of all that is practised, nor a catalogue of the various forms of sexuality. Also I didn’t want to be monotonous and reproduce the same obsession page after page, although I can appreciate this with other illustrators. I wanted to vary the pleasures a bit; certain scenes were also suggested by the author, which introduces another imagination.

Does it say anything about me? Quite possibly! I do like introducing animals, so you might accuse me of zoophilia, but they are there as much for the comedy as to please zoophiles. I like to draw humanised animals, and vice versa, partly because we are animals, and partly because most of the time they are beautiful, though I recognise that there are creatures more attractive than the warthog that waltzes with the Belle! And is my art transgressive? I do have a bit of a reputation in my children’s books for scariness, but I don’t really understand why.

Well, I’m by no means the first. For example, Suzanne Ballivet started by publishing fashion designs in the 1920s, then humour, costumes and theatre sets in the 1930s; she produced her first ‘sensual’ drawings around her fortieth birthday, but it wasn’t until until the 1950s that she produced explicitly-illustrated books such as L’initiation amoureuse.

You can read the original interview (in French) here.