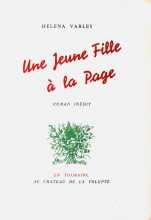 For a writer who, under her own name and a variety of pseudonyms, produced getting on for fifty titles in the 1940s, it is sad that we know nothing about Michèle Nicolaï (1896–1950) beyond her books. As Michèle Nicolaï she wrote at least eighteen romances, starting with La baiser du Sud (Kiss of the South) in 1940 and ending with Pas même un slip pour l’assassin (No Knickers for the Murderer) in 1950. As Nicole Moran she wrote sixteen police thrillers, concluding with Une femme se venge (The Woman Avenger) in 1948. As Jean-Marie Laroche she produced ten romantic thrillers, including Le château des rêves (Castle of Dreams). And before any of these were published, as Helena Varley, she wrote Une jeune fille à la page (A Young Girl’s Journal).

While her later romances dabble in the fringes of sensuality, Jeune fille is extremely explicit. Written in the first person, it tells of the sexual initiation of a girl from the French provincial bourgeoisie, from her first incestuous experiences with her half-brother to her marriage to a wealthy American, who turns out to be very experienced in matters intimate. Bécat’s twelve colour illustrations are also among the most explicit he created for any narrative.

As you will see, we only have some of these images in low-resolution, from the rather disappointing digital version available from the publisher Dominique Leroy; if you can help us source better versions of these rare images we would love to hear from you.