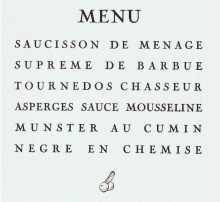 Love and food have always gone hand in hand in French culture, and this lovely André Collot portfolio celebrates the link in very explicit terms, with a large side of visual wit.

The folder for Amour et gastronomie (Love and Gastronomy) consists of a six-course menu, a sheet explaining its purpose, and six colour engravings. 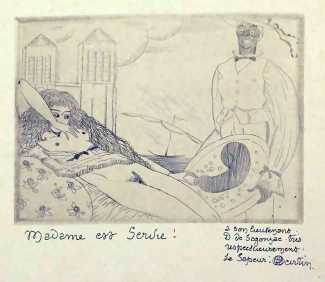 The portfolio has sometimes been attributed to Charles Martin, and there exists a 1917 invitation by Martin entitled ‘Madame est servie’ (Madame is Served), which bears a marked similarity to the Collot images. Part of a New Year’s Eve dinner menu, it is signed and dedicated to Martin’s artist friend Lieutenant André Dunoyer de Segonzac (1884–1974).

The Amour et gastronomie ‘explanation’ sheet, no doubt written by Collot, reads ‘The mouth and the ass go hand in hand, so we have composed for you a menu whose recipes are presented to you graphically for the perfect combinations of orifices and organs too often separated from each other by hypocritical convention, but which it is recommended to bring together as often as possible for the sole purpose of enjoyment. So follow the good advice of the expert chef who has chosen for you these dishes suitable for all budgets.’

Amour et gastronomie was privately published in a limited numbered edition of 100 copies.