Like so many of the mid-century surrealists, Hans Bellmer was fascinated by the writings and ideas of Donatien Alphonse François, Marquis de Sade. They chimed with his conviction that nothing that human beings are capable of is off-limit to the true artist. Bellmer believed absolutely in the free satisfaction of sexual instincts to explore sensuality and creativity, and that the dark forces lurking in the soul of every human being can usefully be explored in the pursuit of creative understanding.

Hans Bellmer produced two Sade-related portfolios, À Sade (For Sade),  Sade in 1961, and the more adventurous Petit traité de morale in 1968. In each of the ten Petit traité prints he uses two prints from his earlier work, some as early as those used in L’histoire de l’oeil, overlapping them and printing them in different colours in order to highlight the extremes of each of his subjects. Thus the first plate, called ‘Dialogue between a priest and a dying man’, overlaps a brown image of 1946 entitled ‘Love and death’ and an olive-green image, ‘Prenatal education’, from 1955, in such a way that brown ‘death’ appears to penetrate the green woman, gripping her breasts and biting her shoulder. Each of the images, engraved by Bellmer at the height of his graphic achievement, is delicately engraved, his line firm and controlled.

As with Leonor Fini’s illustrations to de Sade’s Juliette from the late 1940s (which you can see here), Bellmer’s images do not illustrate de Sade’s narrative so much as create composite illustrations which evoke the spirit of the texts. The engravings of Petit traité do, however, have titles which relate directly to one of de Sade’s works, so we are given some clues about their content.

As it can sometimes be difficult to see each of the two overlapping images in each Petit traité print, at the end of the main sequence we have also included a set of separated pairs in the colours as printed. This helps the viewer to understand the power of each separate image, and the care and inventiveness with which they were combined. 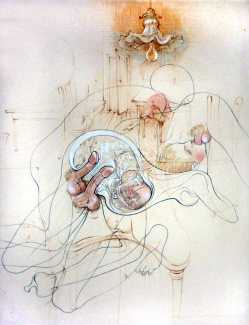 After the two-colour set had been published, Hans Bellmer was persuaded to produce a further limited edition set which was hand-coloured; an example is shown here. They are certainly striking, but much of the shocking simplicity of the original concept has been lost.