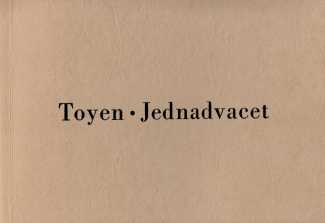 Jednadvacet is Czech for twenty-one, and in this unique portfolio Toyen wordlessly provides what every novice lover needs most – an honest, uninhibited, candid, shameless introduction to sex in all its glory, all its doubts, and all its messiness.

The ‘twenty-one’ is relevant in several parallel contexts, twenty-one drawings about sexual intimacy; twenty-one being the age at which many young people traditionally get married (or at least ‘come of age’); Section 21 of Freud’s 1920 General Introduction to Psychoanalysis, ‘Development of the Libido’; and the Czech name for the card game pontoon, blackjack, or vingt-et-un, where the value of a hand never exceeds twenty-one. Such resonances, all in one word.

Given that Jednadvacet is a picture book, what more is there to say about it? Fortunately the art historian Karel Srp, director of the Prague City Art Gallery, has provided a brilliant postscript essay to the 2002 Torst reprint of Toyen’s wonderful portfolio, which is reproduced below; unfortunately that reprint is now itself a collector’s item.

The drawings were easy for Toyen. Her simple, precise, instantly recognizable, linear style, which she developed from the late 1920s till she emigrated to Paris in 1947, immediately etched itself into the consciousness of the reader. During this period Toyen published several hundred illustrations, and shared in the graphic design of dozens of hooks. Alone or in colla­boration with others, she worked on each book as a whole, designing the dustjacket, binding, title page. frontispiece, vignettes and illustrations. In this way, she had an opportunity to take the high standards of her independent work as a painter and apply them to everyday life, communicating her own artistic ideals in a fashion that was far more comprehensible and acceptable to a public that did not go to exhibitions. With her work as a book designer and illustrator, she developed two different approaches at once – painting strictly for herself and, often only in order to make a living, on commission; though the commissioned work was initially marginal to her oeuvre, it is now clear that it became an important part of it. Unlike in her Parisian period, Toyen approached everything related to book design and illustration (and made outside the Devětsil group and the Group of Surrealists in Czechoslovakia) as an expres­sion of applied art which rarely had any direct influence on her paintings, even though they came from the same period. Few of her paintings were preceded by book illustrations, and vice versa – Toyen rarely took individual motifs from her paintings for use in her illustrations.

Among the drawings of Jednadvacet there is only one (No. 16) that contains subject matter from a painting – namely, Úděs (Horror, 1937), from her sketch-like drawings made in the mid-1920s. Toyen moved to a more monumental, abbreviated, tighter and thoroughly modelled form of expression in the late 1930s. Where some of the drawings of Jednadvacet suffer from a somewhat excessive descriptiveness, which was the result of her interest in thoroughly drawn details of the body – as if the newlyweds were about to take part in a classroom lesson (Nos. 14 and 15) – they have been lightened up with occasional, visually effective touches of waterco­lour. Drawing No. 20 shows the face of a girl who covers her eyes with her hand so as not to see the male and female genitalia that have appeared on the scene; the face has been modelled almost solely by the emptiness, framed by hair, and with the outline of the face like in the artist’s surrealist drawings, marked by vigour and suggestiveness. Brook’s gift is not only the last expressive set in which Toyen dealt directly with the erotic; it is also the sum total of her view of this area. Whereas Toyen made Náš svět (Our World, 1934) to acquaint children with the modern technology designed to make their everyday life easier, Jednadvacet could today take the place of photographs as an erotic primer for adolescents. Originally intended for the purely private use of one couple, it could be used as a graphic example in sex education.

If the drawings from Jednadvacet were judged by the criteria of surrealism, especially of its programmes, they would probably not have passed muster (just as Vítězslav Nezval’s Sonety Roberta Davida (The Sonnets of Robert David) did not stand up in comparison to his Absolutní hrobař (Absolute Sexton) and Žena v množném čísle (Woman in the plural)). This is especially clear when they are compared with her drawings from roughly the same period, which are included in her Přízraky pouště (Spectres of the Desert, 1939), accompanying the collection of the same name by the poet Jindřich Heisler and his Jen poštolky chčí klidně na desatero (Only Kestrels have no Qualms about shitting on the Ten Commandments, 1939). Moving naturally between the high and the low, Toyen in Jednadvacet gives vent even to a sort of refined rococo intimisme. rather than to the clear-cut irrationality that was a principle requirement of surrealism. The closed world of delight is occasionally infused with anxiety; organs of the body evoke not only pleasure, but also fear, and it becomes necessary even to close one's eyes and turn away from the functioning of these organs (see No. 19).

In the 1930s the openness of Toyen’s drawings was unusual, even shocking, especially co­ming from a woman artist (though she herself suppressed the external signs of her own femi­ninity). Whereas among the surrealists all artificial distinctions between the erotic and the pornographic disappeared, they survived in the bourgeois culture for which Toyen’s illustra­tions were intended; whereas surrealism removed the barriers to liberated visual expression, bourgeois society buttressed them as much as possible. Although in her illustrations she sometimes came close to a saccharine sensuality that truckled to readers’ tastes, in the 1930s Toyen moved back and forth between energetic surrealism and soft, calming ‘Biedermeier’. There could not have been a greater distance between the extremes of her art: whereas with the drawings she made for herself she indirectly criticized the rigid aesthetics and ethical rules of bourgeois society, in her commissioned work she sometimes became excessively tied to the very areas she had clearly set herself against. Toyen’s attitude towards life ran up against certain limits here: while she doubted the established criteria of conventional art, she had also been using them to communicate with for a long time.

Though it cannot be said with certainty whether the drawings of Jednadvacet were predo­minantly intended for a man’s or a woman’s eyes, the protagonist of each drawing is almost always a woman; man is represented mostly by his genitalia, which become a fetish here. In these drawings the male genitalia can be kept in a cage, held on a glove, and watched as they ejaculate; one can dance with them or lie with them. Woman has power over the male sex organ; she appropriates it by looking at it or touching it; it becomes a piece on a chessboard, a living puppet, kept as a plaything and a trophy. Judging by the numerous depictions of male genitalia and the subject matter of the dreaming girl who appears twice in Jednadvacet (once in the introductory drawing, dedicated to daydreams, and once, in No. 20, where a girl with closed eyes appears to be dreaming she is asleep on a phallus), it seems that Toyen was acquainting her audience mainly with a woman’s experiences, for example in her drawings alluding to lesbian relationships (Nos. 4 and 21); relationships between men (with the excepti­on of drawing No. 2 of the clowns) didn’t attract her at all. She conceived of male genitalia as a form that had become independent, separated from the rest of the body; they became an idea for her, engulfing and surpassing the female mind, turning into something a woman cannot live without. Whereas in drawing No. 1 it was only a dreamt-of object, in drawing No. 3 the male sex organ has changed into a fetish, something that gives pleasure. As is evident from other drawings in Jednadvacet (Nos. 3, 13 and 20), most depict the projection of a girl’s hidden desire for the phallus as the result of castration – the ‘penis envy’ thesis promoted by Freud and developed by Bohuslav Brouk, concerning the desire to regain an original part of one’s own body, which somebody has stolen. That is clearly illustrated in No. 13, in which a girl with closed eyes is masturbating while touching a disembodied phallus with her other hand, as if it were her booty. With their openness these drawings seem to have anticipated the extraordinary sculpture by Louise Bourgeois, which, despite its being called La Fillette (Young Girl, 1968), comprises a large penis and testicles, which seem to have been torn violently from the rest of the body and hung like a piece of meat in space, to be played with like a toy or carried under the artist’s arm (cf. Robert Mapplethorpe’s portrait of Louise Bourgeois, 1982).

The drawing of the masturbating woman in front of the birdcage here is perhaps the prototype for the whole set of Jednadvacet. It is related to the well-known iconographic motif of the caged bird, which has for centuries been used in painting to indicate loss of virginity. The birdcage is the only clear link between the drawings of Jednadvacet and surrealism. It appears not only in Jindřich Styrský’s well-known photograph of the shattered aquarium in the series Muž s klapkami na očích (Man with Blinkers, 1934) and drawings by Toyen in her war series Střelnice (Shooting Gallery, 1939), where the cage is empty, and Schovej se válko (Hide, War!, 1944), in which the bony remains of hands hang on the bars of the cage, but is employed also in many pictures and drawings by European surrealists, in particular Magritte’s Le Thérapeute (1937), Kurt Seligmann’s drawing of a pointing hand in a cage, published in the Dictionnaire abrégé du surréalisme (1938), could to some extent also be linked with Toyen’s work where she has drawn the male genitalia in a cage instead of a bird. Though perhaps an obvious pun, this is still visually effective.

The provocative subject matter of Jednadvacet emphasizes both the game and the play, not only in the drawings themselves, where a woman’s hand is touching a man’s genitals, but also, indeed mainly, in the motifs which refer directly to play and performance, whether it is a ballet on the tip of a phallus (No. 10), a theatre or circus performance (Nos. 2 and 16), a game of chess (No. 12), a fan of cards (No. 21) or children’s toys (No. 17) — not unlike the little male figurine in Nezval’s Sexuální nocturno (Sexual nocturne). Jednadvacet is in some sense a con­tinuation of Toyen’s interest in the world of children. This is evident not only in her illustrati­ons of fairytales, but also in the important surrealist cycle of war drawings. where the adven­tures of a little girl continue in several prints from the Střelnice series and, in particular, the Dny a noci (Days and Nights) and Zvířata spí (The Animals are Asleep) series from the later years of World War II.