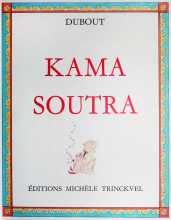 The second of Michèle Trinckvel’s Dubout commissions was for the Kama Sutra (Kama Soutra in French), quite a risky choice given that it took the artist some way from his traditional material. On the other hand the central subject matter of this ancient Sanskrit text about sensual love and pleasure was right up Albert Dubout’s street, and he took to the commission with his usual enthusiasm.

Every one of these illustrations contains qualities which are uniquely Dubout, sometimes humour, sometimes a particular expression, sometimes real beauty – and sometimes all three. The commission came at a time when Albert Dubout and Suzanne Ballivet were enjoying the rewards of what they had worked hard to achieve, and the Kama Soutra illustrations seem to reflect some of this contentment.

The Dubout-illustrated Kama Soutra was published by Michèle Trinckvel in a limited numbered edition of 6,000 copies, of which 500 were produced in a two-volume boxed set including an additional set of plates.