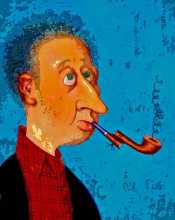 In his introduction to Albert Dubout’s L’oeuvre secrète, published six years after the artist’s death, his close friend the novelist Frédéric Dard penned what is probably the most honest of epitaphs to a man he so much admired. ‘“How courageous he was, this little man who always seemed to be afraid,” wrote Dubout’s wife Suzanne Ballivet a few days after his death – a wonderful sentiment from a wise woman who was for Albert so much more than a companion. It is true; Dubout seemed to dread everything, knowing in his great wisdom that everything is dreadful: the sound of a bell, a bout of flu, a taste of fame. This awareness, this science, of danger is what made his art so powerful. Dubout lived in an impregnable dungeon from which only death could dislodge him.’

To the world, Albert Dubout was a much-loved and prolific illustrator and cartoonist, his output prodigious and his pointed, colourful, exaggerated style accessible and highly commercial. To those close to him he was also an unassuming introvert who thought deeply about the complexities of the human condition, social, political – and sexual.

Born in Marseilles, he studied at l’École des Beaux Arts in Montpellier where he met his first wife, Renée Altier, and where his first drawings were published in the student journal L’écho des étudiants in 1923. The following year they moved to Paris, where his lively street scenes quickly attracted the attention of the editors of the many satirical magazines appearing at the time – Le pêle-mêle, Ric et Rac, Candide, Marianne, and La bataille. Albert and Renée married in 1925, and their son Jean was born five years later.

In 1929 Albert was approached by Philippe Soupault, the literary director of Éditions Kra, who commissioned from him illustrated editions of several important French classics including Beaumarchais, Rabelais and Mérimée. This was the beginning of a career in which he was to illustrate more than seventy books, among which his illustrations for the novels of Marcel Pagnol and Frédéric Dard are probably the best known among French readers.

Alongside his book and magazine illustrations, by the late 1930s he was also firmly established as a cartoonist, the perfect outlet for his more grotesque and imagination creations – large women accompanied by diminutive husbands, crowds of people involved in bizarre activities, mad scenes involving trains and cars. The novelist Marcel Aymé, reviewing one of Dubout’s early cartoon volumes, wrote ‘A Dubout album is an Olympus of stupidity reduced to its basics’.

Albert and Renée separated in 1940, and Albert started spending time with Suzanne Ballivet, an artist he had known since his student days. The post-war period was a very busy period for both of them – they started working with Marcel Pagnol on his highly popular novels in 1948, and Albert worked on several animated films which were also successful. In 1957 Éditions du Valois commissioned illustrations from Albert for La muse libertine, which was to be the first of several Dubout-illustrated volumes on more erotic subjects. At the same time, his trademark cat and railway cartoons – a particularly popular subject was the ‘little train to Palavas-les-Flots’, a seaside town south of Montpellier – were becoming ever more widely known as the gift book and product market grew.

Albert and Suzanne married in May 1968, and for several years they divided their time between his house in Mézy-sur-Seine west of Paris and her family home in Saint-Aunès to the east of Montpellier. By the 1970s Albert was becoming more well known for his edgy illustrations for classics like Kama Soutra and de Sade’s Justine, supported by generous commissions from Paris-based publisher Michèle Trinckvel.

After his death his reputation continued to grow; in 1974 Palavas-les-Flots had already named a street after him, and Montpellier followed in 1980; in 1992 a suitably-quirky museum dedicated to his work and world view opened on a specially-built island in Palavas’ Parc du levant.

The Dubout Museum in Palavas-les-Flots holds a comprehensive archive of Albert Dubout’s work, and organises themed exhibitions as well as its permanent exhibits – and of course there is the omnipresent shop selling Dubout-themed gifts. For more information, visit their website (in French).

Albert and Renée’s son Jean has developed Albert Dubout Communication into a well-organised online resource and shop, which includes a biographical timeline, a photograph gallery, and some of Dubout’s fascinating paintings. The company has also published a comprehensive set of books illustrating Dubout’s work over his lifetime, including a volume of Oeuvre erotique, which contains most of the illustrations from L’oeuvre secrète together with a number of fascinating unpublished drawings. For more information, visit their website (in French).