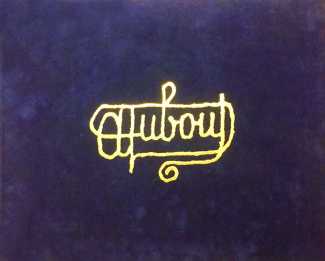 Albert Dubout's L’oeuvre secrète was not published until six years after the illustrator’s death, and it is not hard to see why. The popular image of a happy-go-lucky artist whose main stock-in-trade was cartoon cats and mad street scenes is hard for many to square with his darker work, much of which remained boxed up in his studio until his wife and partner-in-crime Suzanne Ballivet decided it was time to share it.

In his introduction to L’oeuvre secrète, Dubout’s friend Frédéric Dard writes about the day he was finally allowed to see Albert’s secrète:

I cannot remember how many cases were stacked at the Dubouts’. Twenty? Thirty? They contained, he had assured us, his ‘archives’. He had always promised to open some for me one day, and this prospect inexplicably frightened me a little. To dispel my anxiety, I told myself that he would never do it.
He never did.
Where did this strange fear come from? I think I dreaded my greed. To love is above all to desire. I loved Albert’s work too much not to covet more of what he produced; I feared knowing what was in these mysterious crates which transformed their house into a fortress, containing unknown works which would only exacerbate my desire.
Albert died; time passed. And then there was the morning when Suzanne called me at my apartment.
‘Frédéric, what are you doing this afternoon?’
‘Whatever you want.’
‘Albert has decided to show you his archives.’
I will never forget that exceptional day.

It was already clear from the sort of work he was producing just before his death that Albert Dubout was very much occupied with the big existential issues of human relationship, pain and desire, and the opening of the ‘archive’, until that point known only to Albert and Suzanne, showed the extent to which he had been giving his imagination free visual rein.

We can only guess where his preoccupation with gay sex came from, though it is clear that he enjoyed working out exactly how several people might enjoy each other sexually at the same time, and he had the artistic skill to be able to portray it. As with so much of his work, it was Albert Dubout’s ability to take every situation to its absolute extreme, mostly with a remarkable degree of sensitivity and humour, that marks him out as an exceptional artist – and human being.