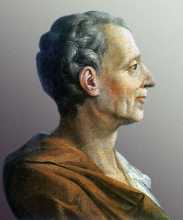 Charles-Louis de Secondat (1689–1755), Baron de La Brède et de Montesquieu though usually referred to simply as ‘Montesquieu’, was a French lawyer, man of letters, and political philosopher, today best known for his influential libertarian ideas about the separation of political power in order to avoid despotism and totalitarianism. As well as his essays, he also wrote fiction, during his lifetime more read than his polemical works. By far the most popular was the short prose narrative in seven cantos Le temple de Gnide (The Temple of Gnidus), supposedly translated from the ancient Greek, but in fact an engaging semi-autobiographical exploration of love and temptation. It was published in 1725.

For many years Montesquieu denied authorship of Le temple de Gnide, possibly because it demonstrated his strong feelings for society hostess Mademoiselle de Clermont. Much later he was to revisit the subject of love in his more theoretical 1757 Essai sur le goût (Essay on Taste), but for the young Montesquieu Le temple de Gnide exalted a chaste sensuality, a refined and sensitive art of loving. 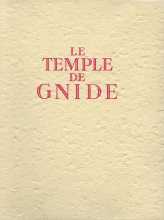 In 1954, towards the end of his long and productive career, Bécat was commissioned by Editions Eryx to illustrate an edition of Gnide, and produced eleven detailed and delicate drypoints demonstrating his considerable skill as an engraver. His naked figures are well-observed and beautifully executed, and unusually in his more popular work he was quite happy to allow women pubic hair and real vulvas, a satyr a proud erection.

Le temple de Gnide was published by Editions Eryx in a limited numbered edition of 488 copies.

An interesting and readable short essay by Carole Dornier about Le temple de Gnide can be found here. The only English translation was published in 1889 by Vizetelly & Co, London, with a preface by Octave Uzanne and plates by Eisen and Le Barbier.