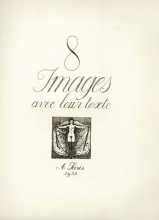 Only 99 sets of the plates were produced, and as they were hand-coloured there is considerable variation in the way each of the plates appears in the copies that have survived. The plates are also sometimes seen in monochrome versions.