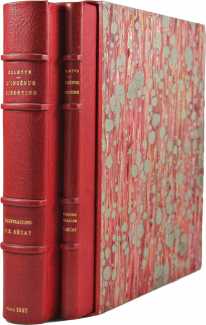 First published in 1909, three years after Colette’s divorce from the overbearing Henry ‘Willy’ Gauthier-Villars and at a time when she was exploring freedom with gusto, both intimate and creative, L’ingénue libertine (The Innocent Libertine) was the perfect vehicle for exploring what that freedom might look like.

Pretty Minne is the daughter of a good Parisian family, but she is supremely bored, finding excitement mostly in newspaper accounts about the gangs of the Paris suburb of Levallois-Perret. One evening she takes matters into her own hands and sets off to see for herself what the dark side of the city is like. Alongside Minne’s risk-taking runs a parallel, more conventional world, in which her cousin Antoine wants her to be his doting wife; even after they are married, however, Minne continues to explore her fantasies. The novel’s ‘happy’ ending is its least successful aspect.

The Bécat-illustrated L’ingénue libertine was published, as many of his were, by Georges Guillot; Paul-Émile’s twenty drypoint plates are supported by drop capitals and cul-de-lampes designed by Marie Monnier-Bécat. The plates demonstrate how Bécat could illustrate a twentieth-century classic just as convincingly as earlier works, and his Minne is absolutely believable.

L’ingénue libertine was published in an edition of 420 copies, of which fifty came with an additonal suite of the prints.