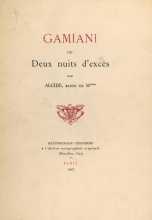 Gamiani, first published in 1833 and widely assumed to have been written by Alfred de Musset, is one of the most-illustrated of French erotic novels. Subtitled ‘Two Nights of Excess’, and based on de Musset’s experiences with George Sand and her lesbian lover, Gamiani opens with Alcide watching Countess Gamiani and her young lover Fanny enjoying one another’s bodies. Very much aroused, Alcide reveals himself and joins them, and they spend the rest of their time together sharing their intimate stories and re-enacting scenes from them. The unsigned plates from the first illustrated edition of Gamiani have been variously attributed to Achille Devéria and Octave Tassaert.

The Avril-illustrated edition was one of the earliest to include plates, and as with all of Avril’s illustrations his characters are convincingly human, clearly enjoying themselves. Even the donkey and monkey are quite believable.

The Avril-illustrated Gamiani was published in Paris, probably by Charles Hirsch, in a limited numbered edition of 320 copies.