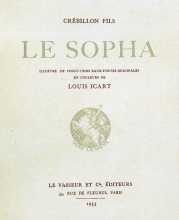 Le Sopha, written by Claude Prosper Jolyot de Crébillon in 1737 and published for the first time in 1740, adopts an oriental framework narrative similar to the Thousand and One Nights, asserting itself as a reflection on the vagaries of desire and love. The narrator, Amanzéï, is transformed into a sopha or ‘wise one’, who will not regain his human form until he has learned the truth about what attracts people to each other. For the bored Sultan Schah-Baham and his Sultana, he recounts the scenes he witnesses by observing seven couples. The last couple, the young lovers Zéïnis and Phéléas whose innocence allows them to fully enjoy their shared pleasures, finally allows Amanzéï’s release.

Crébillon’s skill consists of embroidering endlessly on the same theme without ever repeating himself, and the novel was an enormous success, but it also attracted the attention of the French authorities, who were convinced that they clearly recognised King Louis XV in the ridiculous character of Sultan Schah-Baham. The scandal only increased the popularity of the novel; as well as its success in France it was introduced to the English public by Lord Chesterfield, who found Crébillon a London publisher. Le Sopha had a strong influence on Diderot’s Les bijoux indiscrets, where Mangogul’s magic ring plays the same role as Crébillon’s sopha, and also plays a part in Laclos’ Les liaisons dangereuse, where Madame de Merteuil reads a chapter of Le Sopha to prepare for the arrival of her lover Belleroche.

Icart’s illustrations show him to be a skilled and inventive interpreter of Crébillon’s humorous narrative.

The Icart-illustrated edition of Le Sopha was published by Le Vasseur in a limited numbered printing of 497 copies.