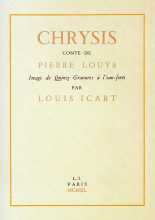 Chrysis is the alternative title for Pierre Louÿs’ best-known work, Aphrodite. Its success was due in part to a very positive review by François Coppée, aided by the many libertine scenes throughout the book. Louÿs's original idea was to write for an elite of a few friends, demonstrating his belief that ‘there is nothing more sacred than physical love, nothing more beautiful than the human body’, but he was pleasantly surprised by the novel’s popularity.

Set in Alexandria, the novel tells the story of Chrysis, a courtesan, and the sculptor Démétrios. A Galilaean with long golden hair (the source of her Greek nickname), Chrysis is proud of her beauty and her skill at winning the devotion and servility of men. Démétrios, for his part, is worshipped by the women of the town, but has grown tired of their devotion. He has come to prefer his statue of the goddess Aphrodite even to his lover, Queen Bérénice, who posed for it. Chrysis is the only woman who does not care for him. Piqued by her resistance, Démétrios is spurred to commit theft and murder for her in order to win the three objects she demands in return for her charms: a rival courtesan’s silver mirror, the ivory comb of an Egyptian priestess, and the pearl necklace that adorns the cult image in the temple of Aphrodite. After carrying out these errands, Démétrios dreams of the night of love that Chrysis has offered him, but while she falls in love with the man who has commited crimes for her, Démétrios rejects the real Chrysis. She presses her desire, so he insists that she appears naked in the role of Aphrodite with the stolen items. Humiliated, Chrysis drinks hemlock in the indifferent presence of Démétrios. He then uses her body as a model, posing it in the violent attitude of his dream, to create a statue representing immortal life. As a tale of impossible perfect love, it clearly struck a chord with Louÿs’ readership.

Icart produced fifteen large etchings for Chrysis, some of his simplest and starkest, which complement well the strong emotions of Louÿs’ text. Smaller truncated versions of the images were included in the book, which was issued with both sets of illustrations.

The Icart version of Chrysis was published by Charles Meunier in a limited numbered edition of 147 copies.