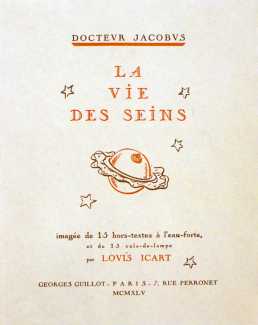 La vie des seins (The Life of Breasts) is a strange volume, designed primarily as an excuse to commission Icart to produce a series of illustrations illustrating one of his favourite subjects. The pseudo-anthropological text is by one ‘Docteur Jacotus Brededin’, supposedly of the ‘Faculté des Sciences Socio-Psycho-Érotologiques’ in ‘L’université d’Ampelople’. Who it was actually written by is anyone’s guess.

Icart’s illustrations for La vie des seins are quite experimental, simply coloured and surrounded by large, almost blank backgrounds. Though the learned doctor claims to show the wide variety of mammaries, they are all conventionally very similar.

La vie des seins was published by Georges Guillot in a limited numbered edition of 196 copies.