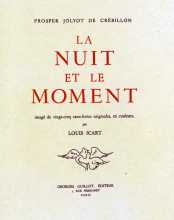 Le nuit et le moment (The Night and the Right Time) is Icart’s second encounter with the eighteenth-century writer Claude Prosper Jolyot de Crébillon. In this witty 1755 dialogue the questioning Clitandre comes to Cidalise’s chamber to discuss his relationship problems with her; she is surprised by his arrival, but quickly warms to the subject as she is having similar issues of her own.

Thus in the course of one night, a man and a woman, each in love with somebody else, gradually warm to each other until they forget past pleasures in present passions. Satire, irony, word play and scandal abound.

As with Le Sopha, Icart also warms to Crébillon’s colourful text, producing some of his best and most imaginative illustrations.