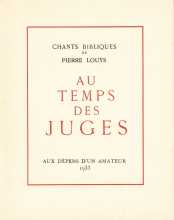 Au Temps des Juges (In the Time of the Judges) sees Collot returning to one of his favourite inspirations, Pierre Louÿs, and one of the many manuscripts which saw the light of day long after Louÿs’ death. As far as is known, this edition of the short pseudo-Biblical fable is the first and only time an illustrated version has appeared, and Collot’s illustrated-manuscript style does the text full justice, showing how readily he could adapt his technique to match the subject matter.

Au Temps des Juges is one of Louÿs’ shortest works, so the text bears including here in full (which as far as we know is the only English translation).

In the Time of the Judges

In the Time of the Judges, it happened that a young merchant named Joel, from the tribe of Nephtali, set off for Jerusalem. He was carrying only a coat, a staff in his hand, and a heavy purse hanging from his belt; at each crossroads he prayed to the Lord to help him choose the right path.
As he walked one evening along the shore of the lake of Gennesaret, two girls came up to meet him. They were sisters, and when they were in front of him, under the moonlight, they pulled up their dresses from their ankles to their navels, showed their shameful parts, and murmured ‘Sleep with us’.
Joel spat on the ground, raised his staff, and shouted, ‘Go away! Get out of my way, you wicked women.’
‘Yes, we are whores,’ said Michol, the younger of the two sisters, smoothing the hairs of her belly. ‘We are whores for the pleasure of men. Here are our dark vulvas that we present to you. Choose.’
Saying that, she took Joel’s member, and feeling him already erect said to him, widening her thighs, ‘Come! My belly is thirsty for your hot seed. Give me a silver coin and sleep with me.
And while Michol, naked to the waist, was holding the member by its tip, Salomith, the elder sister, took it by the root and said, ‘Lie with my sister, for she is in heat.’ So Joel let himself be led by his member, and gave Michol a silver coin.
Between the bushes and the shore of the lake, Michol knelt on the grass so as not to soil her dress, and pressed both hands on the ground. Joel knelt down behind her, like a bull going up on a heifer.
Salomith grabbed Joel’s member with her right hand as the cowherd grabs the member of the bull, and planted it straight in the hole, saying ‘Blessed be the Lord, the one who sows his seed in my womb sister.’
The member penetrated all the way in, and pushed back the womb which had not yet conceived. Joel vigorously made the movements of copulation. The pleasure made him tremble on his knees, and seven long spurts of sperm from his member embedded in the warm flesh of Michol, who moved her firm hips. And she smiled over her shoulder.
When he had done, Michol crouched in the water of the lake, and with her fingers she drew the sperm from her belly. Then, turning to the moon, she pissed on the water to ward off conception.
When Joel returned, Salomith, the sister, wiped his member with her black hair, so delicately that the empty testicles swelled up. Salomith placed his member between her two breasts, which she squeezed together on him like amorous thighs, and she said, ‘Do you like my breasts?’
He replied, ‘I love your breasts. They are more beautiful than your sister’s.’
Then Salomith slid her hand along his member to the hairs of his belly, which grew like the tall grass on the edge of the lake of Gennesaret, and with his two hands he opened the red lips of her vulva.
‘Do you like my vulva?’ she asked.
As he tried hurriedly to enter her, like a like a horse on heat, Salomith said to him, ‘No, no, no. Don’t you know what sort of girl I am? I am a whore, and a whore’s daughter; my mother is a whore. If God gives me daughters I will make more whores who will allow their flesh to be searched by the flesh of passers-by. Do not kiss my mouth; it is the mouth of a whore.’
But he kissed her mouth and pushed himself between her legs. ‘Do you like my vulva?’ she repeated.
And he said softly, ‘I love your vulva.’
Then, ceasing to mock him, she raised her dress higher than her shoulders; Michol took it to hang from a tree and Salomith, completely naked, threw herself on Joel’s body.
And so she put the man between her knees, and moving her rump like a dancer she sat down gently on the tip of his member, which entered her and made her shudder. When that was done, she rubbed her hair over Joel’s, then made the copulation movements herself sixty times.
Michol, crouching behind, caressed his testicles, and when she felt the sperm spurting she too murmured, ‘Blessed be the Lord who sows his seed in my sister’s womb.’
Soon Salomith got up; the member came out of her belly and she fell back into the fresh grass. She collected on her fingers the sperm flowing from her vulva, and she put it in her anus to ward off conception. Then she knelt down, touching the ground with her forehead and turning her buttocks towards the full moon, and pissed from behind so that the stream of her urine fell back into the waters of the lake.
Then she tore off a handful of grass and stuffed it into her vulva, entered the lake to the waist, and dropped the grass with the sperm, all the time making spells because she did not want a child.
And Joel too pissed on the shore.
Salomith then said to him, ‘You are weary. Let us put our clothes back on, and you can follow us. Our house is your house. Our servant is your servant. You will sleep between my sister and me.’
But Joel replied, ‘I am not so tired. I will pleasure you, your sister, and your servant until daybreak.’
And Salomith said, ‘Glory be to God who has brought you to us. I too will pleasure you, my sister and my servant alike, all on my own bed.’

Au Temps des Juges was produced ‘Aux dépends des amateurs’ (at the expense of amateurs) in a limited numbered edition of 175 copies.