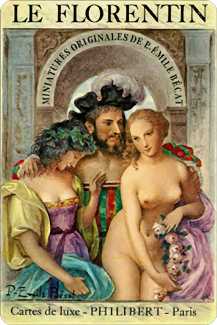 In 1954 Paul-Émile Bécat received a commission of an unusual kind from the Paris-based playing card manufacturer Éditions Philibert, who between 1954 and 1960 specialised in publishing luxury series of artistic and sometimes risqué playing cards. The Philbert cards were produced to a high standard, with gilded edges.

Philibert asked Bécat for a set of card designs based on Renaissance-style paintings, and he obliged with a set of sensitive and detailed watercolours, quite different from his usual illustration style. It took him two years to complete the commission, but it resulted in Le Florentin, considered to be one of the most beautiful sets of playing cards ever created. Twelve thousand sets were produced, and sold very quickly.

Each of the court cards in the Florentin pack can be read both ways up, and the accompanying leaflet explains what each card represents.