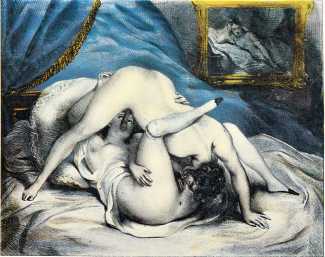 Gamiani – Musset or not Musset?

The attribution of the text of Gamiani has a long history of rumours, and of uncertainties that later turn out to be certainties. There were always suggestions that Alfred de Musset was its author, from the moment the publisher Poulet-Malassis wrote in the preface to his Parnasse satyrique du XIXe siècle in 1866, ‘On a des preuves que M. Alfred de Musset est l’auteur de ce roman’ (We have proof that M. Alfred de Musset is the author of this novel), though he omitted to mention what that evidence was. From then on supporters and opponents argued about why Musset had to be the author and why he could not possibly be the author. His proponents described it as a masterpiece and spoke of its psychological depth, while his opponents countered that Musset was not at all like that, being rather a timid and romantic young man who was incapable of anything quite so vulgar. Alfred de Musset himself never commented on it.

But shouting loudly and presenting arguments without providing facts proves nothing, and as we shall see it now appears that Poulet-Malassis was quite reliable in his assertion, though the necessary evidence has only recently come to light.

In a letter to Henri Beyle, better known as Stendhal, Prosper Mérimée wrote about this ‘timid romantic youth’, ‘Yesterday I went to dinner with our dining friends from the Rue de la Draperie, along with Sharpe and Musset. Musset, who was all friendliness and rather drunk with champagne, was in a good mood. He asked us to imagine how he would fuck a girl surrounded by twenty-five candles. The proposal was accepted willingly, and we immediately set out to implement it. There were riots going on that day and it took all the effort in the world to get past the massive police guard. When we arrived at Leriche, our romantic poet had a bloody nose, and despite all his efforts and all the skills of the two girls he had engaged, he got absolutely nowhere.’

Another source also shows that Musset was certainly no gentleman. Céleste Mogador, Comtesse de Chabrillan and a reformed prostitute, states in her Mémoires that when she was still working she had a terribly unpleasant client, ‘brutal, malhonnête et toujours ivre (rude, unreasonable and always drunk), Alfred de Musset.’

If anyone had looked in the right place, it would have been clear since 1915 that Musset was the author of Gamiani. It was the German scholar Iwan Bloch, in an excellent study in the Zeitschift für Sexual-wissenschaft (1915, Volume 2), who proved that it was indeed Musset. The main evidence was the connection between two friends, the German-Hungarian writer and traveller Karl Maria Kertbény, and Paul Lindau, a specialist in French literature. Kertbény sent a copy of Gamiani to Lindau (published by Poulet-Malassis, whom he knew personally), accompanied by a note in which he wrote that during a stay in Paris in 1847 he visited Musset on several occasions, who had shown him a copy of the original edition of Gamiani containing ‘a number of extremely obscene lithographs nwhich he himself had drawn’. Kertbény undoubtedly discussed this with Poulet-Malassis, because a year later the latter’s Parnasse satyrique appeared, with the well-known Gamiani attribution to Musset.

As part of his research, Lindau interviewed Alfred de Musset’s older brother, Paul de Musset. Up until then Paul had always maintained that Gamiani was not written by his younger brother, but in 1916, when Paul de Musset was seventy-six, he finally admitted that Alfred was indeed its author.

A work of two parts

The complete Gamiani consists of two parts, of which the first part initially stood on its own, titled Gamiani, ou une nuit d’excès. This first part on its own was called simply Gamiani. The second section, added later, is entitled Gamiani, deuxième partie, and contains the now well-known second night.

At first glance, this second part seems from the handwriting to have been written by someone else, but on closer inspection a comparison of certain details suggests that the same hand was at work, but possibly in more of a hurry. The editor responsible for the publication of Musset’s complete works in the Pleïade (a beautiful albeit costly) edition, Simon Jeune, took it upon himself to scrutinise Gamiani, and was convinced that the second part had been written by Musset, and after a more than thorough investigation Jean-Jacques Pauvert decided to publish a revised text of Gamiani based on the original from 1833. To this was added a preface by Simon Jeune, in which he provided further evidence that it was indeed written by Alfred de Musset.

The original Gamiani of 1833 featured twelve hand-coloured lithographs, which you can see here. Several artists have been suggested as to whose hand these could be by, the most mentioned being Achille Devéria, probably together with his colleague Henri Grévedon. Devéria was an extremely popular draftsman and lithographer, sought after by the general public and particularly within the world of eroticism and pornography. He needed to be careful, but did not really need to worry about prosecution, since he enjoyed sufficient protection from various dignatories and authorities.

Octave Tassaert, rather than Grévedon, has also been suggested as a possible collaborator of Devéria. Devéria was an intimate friend of Musset, so it is likely that he was primarily responsible for any collaboration. An investigation by Jacques Duprilot, the results of which appeared with a well-prepared reissue of the 1833 original of Gamiani by Slatkine, shows that the printed  calligraphed pages and the lithographs come from the lithographic studio of Charles Motte, Devéria’s father-in-law. However, a proof of one of the lithographs, signed by Tassaert, has recently surfaced in the Cabinet des Estampes of the Bibliothèque Nationale, so it is now assumed by many that Devéria and Tassaert were responsible for the execution of the lithographs.

The question remains as to whose drawings the lithographs are based on. It is known that Musset, in addition to being a writer and poet, was also an excellent draftsman, and we also know that he spoke to Kertbény about the fact that there were drawings for Gamiani by his own hand. It is not known whether his brother spoke to Paul Lindau about this. However, it would not be at all beyond the bounds of possibility, and especially with the first-hand testimony of Karl Maria Kertbény, to imagine that it was Alfred de Musset’s own drawings that were transferred to lithographs by Devéria and Tassaert.