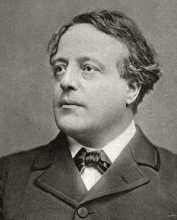 The multitalented and resourceful French painter, illustrator, caricaturist and lithographer Adolphe Léon Willette is remembered for many things, among them designing the trademark windmill on the roof of Montmartre’s famous Moulin Rouge theatre and standing as an anti-Semitic candidate in the politically-charged 1889 Paris city elections (he received just 19 votes). Willette grew up in a military family in Châlons-sur-Marne in eastern France, and studied in Paris. His first press cartoons appeared in 1877 in La Jeune Garde and La France illustrée under the pseudonym Nox.

Willette’s artistic output was prodigious and constant. As well as a regular flow of cartoons and engravings, among other things he designed fans, sweet boxes, menus, leaflets, shop signs, postcards, birth announcements, posters, murals, illustrated songs, carnival floats, stage costumes and religious banners. He decorated many Montmartre cabarets and restaurants. including the Auberge du Clou, the Cigale, the Tabarin and the Taverne de Paris, as well as a lounge at the Hôtel de Ville, and in 1889 he decorated the Moulin Rouge with its famous windmill.

The author and playwright Claude Roger wrote of Willette, ‘his work is striking in its liveliness, its contrasts and the abundance of life that it exalts. His work is a reaction against the sadness of the generation which followed the war of 1870, expressing the joy of breathing freely again, of enjoying the world with frankness and honesty.’