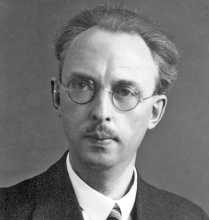 The German artist Alfred Hanf was one of those people who rarely left his home town, in his case Erfurt in the central German state of Thuringia. He attended the Kunstgewerbeschule (Arts and Crafts School) in Erfurt from 1908 to 1910, and after serving in the First World War worked as drawing teacher. In 1919 he was a founding member of the expressionist art group called Jung Erfurt (Young Erfurt), whose other members were Walter Fernkorn, Willy Kirch, Theo Kellner, Otto Mehmel, Richard Bauroth, Curt Hotzel, Walter Passarge, W.R. Huth, Karl Schneider and Karl Luedecke. The group lasted until 1924, the year in which Hanf designed murals for the Reichsferienheim of the Socialist Workers’ Youth Associations in the Tännich Palace near Breitenheerda, and for a new school in Friedersdorf near Grossbreitenbach. Both were sadly painted over in the 1930s.  In the late 1920s Hanf turned more to a lyrical, soft, impressionist style.

Hanf was closely linked to art life in his home town of Erfurt for over half a century, which helps explain the different styles and techniques in his work. These included pencil drawings, etchings, copperplate engravings, woodcuts, linocuts, watercolours, and oil paintings, while his subjects covered portraits, nudes, book illustrations, bookplates, commercial graphics, postcards and typeface design. He recorded much of what became known as ‘the Erfurt idyll’, an idealised landscape which was rapidly disappearing, capturing the streets, alleys and squares of Erfurt and its surroundings before wartime bombing and industrialisation changed them completely.