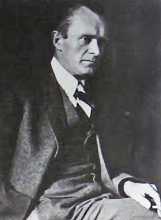 Alphons Woelfle was destined from birth to be involved in books and graphic design. The Woelfle (or more properly Wölfle) family were intextricably connected with the world of books, successive generations having operated as booksellers and publishers in a continuous line going back to the last quarter of the eighteenth century. In 1837 Alphons’ grandfather, Johann Georg Woelfle, purchased the business of Georg Joseph Manz in Landshut, the Krull’sche Universitäts-Buchhandlung, and a sister branch in nearby Freising. Further branches were soon established in Ingoldstadt and Deggendorf, run by Johann Georg and his three sons. Then in 1875 Alphonse’s father Hermann took over the Landshut business, paving the way for Alphons to take over in due course.

But Alphonse had other book-related ideas. Showing an early talent for graphic design, from 1900 to 1905 he trained in Munich as an illustrator with the artist Anton Ažbe. By 1908 he was working for local publisher Albert Langen Verlag, providing illustrations for many of their books and fashioning special custom-made bookbindings, work which he particularly relished and which remained a speciality throughout the rest of his life. Woelfle and his wife were caught by surprise during a visit to Paris when World War One broke out in August 1914. They spent the next four years confined in a French internment camp. 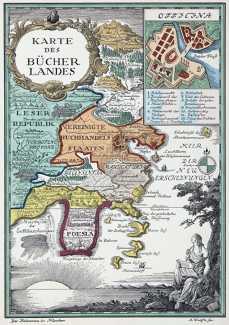 In late 1918 Woelfle returned to Munich and developed further his distinctive rococo and romantic style of graphic art, elements of which are readily apparent in what is probably his best-known work, the 1938 Karte des Bücherlandes (Map of Bookland), an elegant, witty and intelligent commentary on the world of books and publishing condensed into a Renaissance-style atlas map.

During the 1930s he became an established figure in the southern German press as caricaturist for the Süddeutsche Sonntagspost, a newspaper for which he also became chief editor. It was position which, until his views became untenable to the Nazi regime in 1934, provided a platform for him to write regular articles about Munich art and culture.

Woelfle and his wife spent the Second World War in Munich, which proved a costly decision, as an Allied bombing raid destroyed almost his entire personal art collection, including much of his own work.