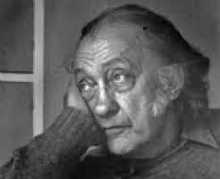 Though his lifelong base was Paris, Armand Petitjean was always most comfortable in wild nature, especially the hills and mountains which reflected his sparse style, always tending towards the abstract. His artistic career began as a lithographic apprentice, and at the age of just seventeen he won the Gustave Doré prize for one of his woodcut book illustrations.

Five years later, in 1933, he decided to give up the city and printmaking to become a painter. It was the start of a personal and artistic journey that took him from Béarn in the Pyrenees, to Provence, and finally back to Paris. While living and painting in the mountains he became close, possibly intimate, friends with the mountaineering pioneer Robert Ollivier; they lived together for a while in 1938 and Armand painted a series of gaunt landscapes of abandoned mountain villages.

After the Nazi invasion of France in June 1940, together with thousands of other ‘dangerous radicals’, Petitjean was detained in the Stalag 150 prison camp at Sens for several months, where he met and made friends with the writer André Malraux; the experience marked him deeply and opened up new artistic horizons.

Receiving a prize for young painters in 1946, he took part in the Salon de Mai, the Salon d’Automne, Comparaisons, and from 1966 the Réalités Nouvelles, an exhibiting society devoted to pure abstract art. Little by little he abandoned figurative compositions to engage in abstract expressionism. In the 1960s Petitjean was one of a group of painters surrounding the Hungarian philosopher, poet, historian and critic Imre Pan. A 1970 critique of Petitjean’s work tells that ‘He is one  of those artists who have succeeded in conquering lightness and transparency’.