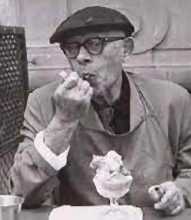 The Austrian artist and illustrator Axl Leskoschek, born Albert von Leskoschek, grew up in Vienna. He studied law until 1917, before he went to fight in World War I where he was severely wounded. After the war he studied art at the Kunstuniversität (Art School) in Graz, where his teacher was Alfred Schrötter, and then in Vienna under Alfred Cossmann.

Leskoschek’s politic orientation was actively socialist, and his artistic and editorial work followed his politics all his life. Until 1934 he worked as an editor for the social democratic newspaper Arbeiterwille (Workers’ Demands), at the same time creating book and magazine illustrations; for his illustrations he was awarded the Österreichischer Staatspreis (Austrian State Prize) in 1925. In 1937 he was a founding member of Graz Secession artists’ group.

Leskoschek’s political activism frequently angered the authorities, especially after he became a member of the communist party in 1934; he was jailed for short periods in 1934, 1935 and 1936, and in 1938 fled Austria when the Nazis took over power. With the help of a Christian church organization he was able to travel to Brazil, where he worked from 1941 until 1948 as a professor at the Academy of Fine Arts in Rio de Janeiro. He returned to Austria in 1948, and continued to produce illustrations. A retrospective exhibition of his work was shown in Graz in 1971, and a second in Vienna in 1974.