The son of a master craftsman in Mainz, Carl Schwalbach attended the Mainz Werkkunstschule (Arts and Crafts School), before moving to Munich in 1902 to complete his art training, first at the art school in Luisenstrasse, then from 1904 to 1908 at the Academy with Gabriel von Hackl and Carl Marr.

In the period just before the First World War Munich was a fertile seedbed of artistic and literary experimentation, and now in his mid-twenties and full of ideas, Schwalbach was ideally placed to be part of the core group of similarly-minded artists. In the summer of 1911, under the name Sema (the Greek word for ‘sign’), a group of artists came together ‘based not on social and economic professional interests, but on common cultural and artistic goals, to avoid the isolation of modernity, and to replace the aesthetic conception of art with the spiritualisation of art’. The group consisted not only of visual artists, but also included members from the fields of literature, architecture and music.

Of the eight artists who were founding members of Sema, Carl Schwalbach was in distinguished company, the others being Karl Caspar, Maria Caspar-Filser, Paul Klee, Alfred Kubin, Max Oppenheimer, Edwin Scharff and Paul Ludwig Troost. Sema’s first exhibition was held in April 1912 in the Heinrich Thannhauser Gallery, and a second followed in January 1913 in the Mannheimer Kunstverein. At the time of the Munich exhibition, the group produced a portfolio of fifteen lithographs by the participating artists, which was published by Delphin Verlag Munich.

At the same time as being part of Sema, Klee and Kubin were also part of the avant garde expressionist Blaue Reiter group, whose bold new ideas quickly eclipsed the more symbolic and spiritual artwork of Sema. Being more of a traditionalist than an experimenter, Schwalbach settled into a comfortable career of painting large set pieces, which were regularly exhibited in Munich Galleries. He continued to contribute new paintings to the Secession exhibitions at the Munich Haus der Kunst until 1966.

During the Third Reich period Carl Schwalbach was considered ‘eine ikone der NS-Kunst’ (an icon of Nazi art), his strong Aryan figures appealing to the spirit of the times. 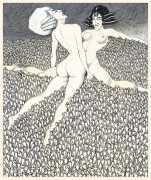 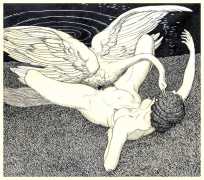 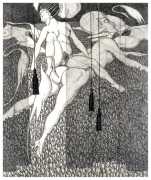