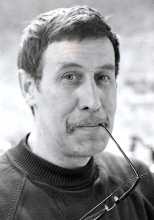 The Dutch artist Cornelis Labots grew up in Amsterdam, and after leaving school attended the Amsterdam Graphic School from 1935 to 1938, where he followed the three-year book-printing course.

Besides working as a printer, he became a self-taught painter and graphics artist. In his free time he studied at the Stedelijke Academie voor Schone Kunsten (Municipal Academy for Fine Arts) and the Vesper Drawing School in Merksen, Belgium, where he lived between 1963 and the end of 1974. His teachers were the Flemish graphics artist and glass painter Antoon Vermeylen and the graphics artist Frank-Ivo van Damme. Labots first exhibited in Amsterdam in 1974.

Cornelis Labots left a legacy of woodcuts, wood engravings, etchings, lino cuts, drawings, paintings, and a number of ex-libris. He also sculpted in clay, sandstone and wood. He illustrated a number of schoolbooks, and contributed regular illustrations to the weekly news magazine De Uilenspiegel.