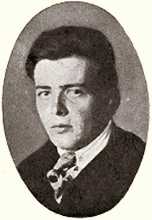 Emmerich Alois Hruška, who grew up, studied and worked in Prague all his life, was a true creative all-rounder. Painter, writer, editor, playwright, publisher and cabaret actor, he was involved in almost every aspect of the city’s cultural life, but especially in theatre and publishing. In the late 1920s and throughout the 30s, he collaborated with the Rococo Theatre, and in the 1940s was the playwright of the Jára Kohout Theatre. He was also a writer and journalist with the radical Prague newspaper Polední List (Lunchtime Bulletin) which was founded in 1926, acting as its cultural editor for many years until it stopped publication in 1946.

Around 1916 Hruška became friends with the writer, painter and printmaker Josef Váchal, who taught him the technique of woodcut, and though his energies mostly went into writing, Hruška found time to develop his artistic skills, regularly designing bookplates for himself and his friends.

As well as writing under his own name, Hruška published works under a variety of pseudonyms including Notus Ignotus, Henri Poire and Viktor H. Ražek. Critical reception of his work, both literary and artistic, was unsurprisingly varied, the critic Ivan Adamovič commenting that ‘his work does not often excel in style, but it has considerable interest emanating from its curious and sometimes grotesque world view’. 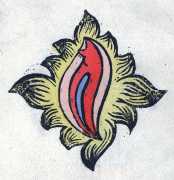