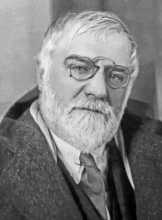 A 1911 review of Franz Naager’s many achievements suggested that he was ‘the strongest and richest decorative talent of our time’. Artist, architect, interior designer, a man of many creative talents, he was then at the height of a successful career, but within a few years his meteoric rise was to be halted by economic and personal circumstances.

The son of a respected Munich public prosecutor, Franz Naager showed an early talent for art, and at the age of sixteen he entered the Munich Kunstgerwerbeschule (School of Arts and Crafts), where he became a student of Ferdinand Barth. In 1889 he attended drawing lessons with Gabriel von Hackl, and in 1890 he moved to the Munich Academy to work with the painter and craftsman Rudolf Seitz, who together with Gabriel von Seidl had a studio for interior decoration, and was friends with the architect Lorenz Gedon. Through the offices of his teacher, Naager received orders from Seidl and worked for Gedon.

Though Munich was his home, Naager’s heart was in Venice, to where he traced some of his ancestry. He was passionate about Venetian art, and from his first visit to Venice in 1893 onwards, borrowed heavily to buy works by Bellini, Giorgione, Greco, Magnasco, Tintoretto, Titian and Veronese. He bought the Palazzo Contarini and several other small palaces, and established workshops for sculpture, architecture and interior decoration, in which he employed up to two hundred workers. He invented a new process for printing wallpaper, designed inlays, mosaics and reliefs, jewellery and furniture. He also acquired a Venetian wife, Nice Della Rovere.

Naager was now much in demand. Gabriel von Seidl commissioned him to decorate the Villa Scherl in Berlin, where he made the acquaintance of Privy Councillor Hoffmann, who was responsible for the design of the atrium of the Wertheim department store. Further commissions followed – the imperial palace, the town hall, hospitals and cemeteries, department stores and restaurants, private villas and palaces. In 1913 the Prussian State awarded him the title of Professor for his services to Berlin.

By this time his childless marriage with Nice had failed, and in 1913 he married Lorenz Gedon’s daughter Gogo. He now bought the spacious Schack-Galerie in Munich’s Briennerstrasse from Kaiser Wilhelm II, and opened it as a gallery for his extensive collection. But his timing could not have been worse – the outbreak of war meant that work dried up and he was forced to sell most of his paintings at a loss.

With the last of his savings, he bought a small house in Bergen am Chiemsee, away from the major art centres of Berlin and Munich. He rediscovered his love for painting and printmaking, and from then on devoted himself exclusively to these smaller-scale passions. In 1924 he sold his property in Bergen am Chiemsee and spent several years alternating between Munich, Venice, and Schloss Tittmoning on the Salzach, before returning permanently to Munich in 1934.