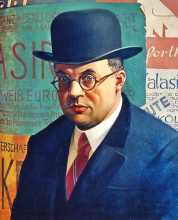 The German artist Georg Scholz grew up in Wolfenbüttel in Lower Saxony, and studied art at the Karlsruhe Academy, where his teachers included Hans Thoma and Wilhelm Trübner. He later studied in Berlin under Lovis Corinth. After military service in the First World War he resumed painting, working in a style fusing cubist and futurist ideas. In 1919 Scholz became a member of the Communist Party, and his work during the next few years was harshly critical of the social and economic order in post-war Germany.

His ‘Industriebauern’ (Industrial Farmers) of 1920 depicts a bible-clutching farmer with money erupting from his forehead, seated next to his monstrous wife who cradles a piglet. Their subhuman son, his head open at the top to show that it is empty, is torturing a frog. Perhaps Scholz’s best-known work, it is typical of the paintings he produced in the early 1920s, combining a controlled, crisp execution with corrosive sarcasm.

Scholz quickly became one of the leaders of the Neue Sachlichkeit (New Objectivity) movement, a group of artists who practiced a cynical form of realism, a group which also included Max Beckmann, George Grosz and Otto Dix. For a few years Scholz’s work vied with theirs for their brutal honesty and ferocity. By 1925, however, his approach had softened into something closer to neoclassicism.

In 1925 he was appointed a professor at the Baden State Academy of Art in Karlsruhe, where his students included Rudolf Dischinger. Scholz began contributing in 1926 to the satirical magazine Simplicissimus, and in 1928 he visited Paris, where he especially appreciated the work of Pierre Bonnard.

With the rise to power of Hitler and the National Socialists in 1933, Scholz was dismissed from his teaching position. Declared a ‘degenerate artist’, his works were among those seized in 1937 as part of a campaign by the Nazis to purify German culture, and in 1939 he was forbidden to paint.

In 1945 the French occupation forces appointed Georg Scholz mayor of Waldkirch, a small town in Baden-Württemberg, but he died later that same year. 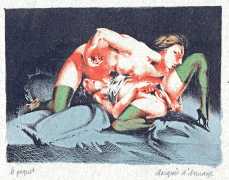 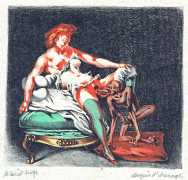 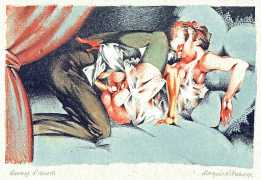 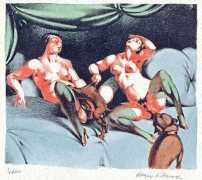