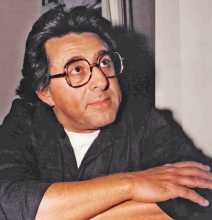 The Italian artist and cartoonist Giuseppe Zaccaria, better known under his pseudonym Pino Zac, was born in Trapani in Sicily, and spent his childhood in Pratola Peligna in central Italy before moving to Rome to study architecture in 1951. Drawing was always his first love, however, and his first comic strip Gatto Filippo (Philip the Cat), for the newspaper Paese Sera, was the first comic strip ever to be carried by a newspaper in Italy, appearing continuously for eight years from 1951. When the strip was cancelled in 1959 he mainly worked abroad, creating humorous strips for several European publications, making short animated films, producing a set of tarot cards, and even doing a little acting.

Between 1971 and 1985 he contributed to the satirical French magazine Le Canard Enchaîné. He returned to comics in 1972 with Orlando Furioso, published in the Italian magazine Eurêka, for whom he also produced Kyrie Eleison. His work also appeared in the French magazines Pilote and L’Écho des Savanes, as well as in Pourquoi Pas? in Belgium, Playtime in the UK, and the Polish magazine Spillky. In 1983 he founded the cultural and artistic magazine Anamorfico.

Zaccaria’s profane, irreverent satire inevitably upset the subjects of his humour, and sometimes created legal problems. Among his favourite targets were corruption within the Catholic church and the absurdities of sexual repression. In 2002 Nobel Prize-winner Dario Fo remembered him as ‘the first cartoonist in the world to draw the Pope without any clothes’.

Zaccaria was also active as a director and screenwriter of animation films. He realised some twenty short films, and the experimental feature film Il Cavaliere Inesistente (The Nonexistent Knight), based on the novel with the same name by Italo Calvino. In 2015 a documentary film about Zaccaria, Zac: I Fiori del Male (Zac: The Flowers of Evil) by Massimo Denaro, was screened at the 72nd Venice Film Festival.