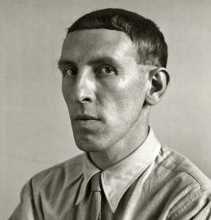 Heinrich Hoerle was a German constructivist artist, very much associated with the Neue Sachlichkeit (New Objectivity) movement. Hoerle grew up in Cologne, and studied at the Kölner Werkschulen (Cologne School of Arts and Crafts), but was mostly self-taught as an artist.

After military service in World War I he met the constructivist painter and sculptor Franz Wilhelm Seiwert in 1919, and worked with him on the journal Ventilator. Together with his wife Angelika (1899–1923), Hoerle became very active in the Cologne Dada scene around Johannes Baargeld and Max Ernst. He co-founded the artists’ group ‘Stupid’, and in 1920 published Die Krüppelmappe (The Cripples’ Portfolio), which established his style as a powerful combination of figurative constructivism and dour absurdism. He was very much influenced by the Russians Vladimir Tatlin and El Lissitzky, by Fernand Léger, and by the Dutch De Stijl movement. His paintings feature generic-looking figures, presented in strict profile or in stiff, frontal poses.

In 1929 he began collaboration with Seiwert and Walter Stern on the publication of a–z, the journal of the Cologne Progressives art group. He was among the many German artists whose works were condemned as degenerate art when the Nazis took power in 1933. 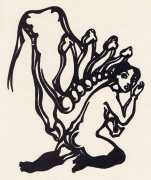