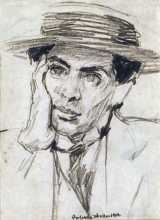 For somebody that several websites describe as ‘an important Hungarian artist’, remarkably little appears to be known about the talented and prolific painter and engraver István Azary Prihoda.

We know that he studied at the Magyar Képzőművészeti Egyetem (Hungarian College of Fine Arts) in Budapest, and that after finishing his studies at the Art Academy of Budapest, he took part in several exhibitions with his paintings and etchings. He was awarded the State Graphic Prize several times for his etchings. During World War I he served on the Russian front, where he was captured and became a prisoner of war. During the revolution in February 1918 he managed to escape and flee home. In 1919 he designed a propaganda poster for the new regime, the Hungarian Soviet Republic.

Poster design was to become one of his specialities; during the 1920s and 1930s he created posters advertising bars, theatre shows, radios, and the League of Nations.

From the early 1930s he served as head of the graphics department at the College of Fine Arts. His highly-detailed etchings included figure studies and religious scenes, while his paintings continued a pre-war theme of nudes and portraits. His work comes to the market fairly regularly, demonstrating that Prihoda was a versatile artist working in a variety of media, and comfortable with a wide range of commissions from individual portraits to posters for restaurants and political parties and illustrations for religious texts.