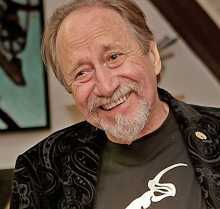 Juarez Machado made art his life, an inexhaustible source of love immortalized by an extensive and brilliant career. With vocation to audacity and sense of humour, the artist is recognized in Brazil and abroad for his many creations, rich in details, features and colours absolutely unmistakable.

Painter and multimedia artist, author of several books published as non-text narrative and awarded in Japan with the "Nakamori" as the best children's book by "Ida e Volta". In architecture and design worked alongside Sergio Rodrigues, Caio Mourão, Oscar Niemeyer, Paulo Caze, among other important names. He drew cartoons and signed columns in dozens of print publications as O Pasquim and Jornal do Brazil. Illustrated book covers, records covers and school notebooks.

On Globo TV, was part of the creative team of humour and music video shows. He created costumes and produced scenarios for theatre and television, where he also acted. His mimic character on the weekly television show Fantastico is still one of the greatest references of Brazilian television of the 70s. In cinema, the art of Juarez also inspired several productions, artists and directors such as the french filmmaker Jean-Pierre Jeunet in the award winning Le fabuleux destin d’Amélie Poulain film with five Oscar nominations in 2002.

Juarez Machado is in constant production, dividing his time between his three studios -Paris, Rio de Janeiro and Joinville.