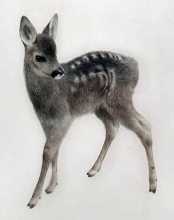 If you search for Kurt Meyer-Eberhardt on the internet, you will find dozens of images of cute cuddly kittens, adorable puppies and doe-eyed deer, and you can buy reproductions of many of his best-loved animal portraits. Animal portraits were both Meyer-Eberhardt’s speciality and his main livelihood, and he was fortunate in being extremely good at making animal prints quickly and beautifully. But that wasn’t all he used his artistic talents for, and he deserves to be better known for the wide range of work he produced in his long career.

Kurt Meyer-Eberhardt grew up in Erfurt, and from 1912 to 1917 studied at the Grossherzoglich-Sächsischen Hochschule für Bildende Kunst (Grand Duke of Saxony University of Fine Arts) in Weimar with Max Thedy, Theodor Hagen and Walther Klemm. After a short period of military service, in late 1919 he returned to Weimar to join the newly-established Bauhaus, where he attended life-drawing and portrait courses with Lyonel Feininger. In July 1920 he married fellow Bauhaus student Luise Gertrud Neumann, and they moved to Munich.

For a few years Meyer-Eberhardt experimented with different styles and media, including Expressionism and Cubism, but he was most comfortable with drypoint etchings of animals, which unsurprisingly found a ready market, so from the early 1920s he concentrated on naturalistic art, mostly drypoints but with some oil paintings. He regularly worked on commissions for animal portraits and hunting scenes.

He never forgot that there is more to art than endearing animal prints, and used his talents to portray the suffering of animals including circus poodles in the late 1920s and abandoned horses during the Second World War. Working from his studio in Gedonstrasse in Munich-Schwabing, during the 1930s he was an active member of a circle of Munich artists which included Adolf Brütt and Oskar Coester. After the war he concentrated on landscapes, interiors and still-lifes. In recognition of his contribution to art, in 1972 he received the Freedom of Munich. 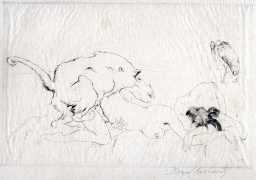 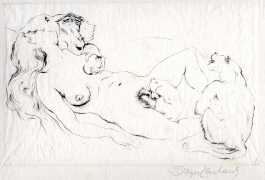 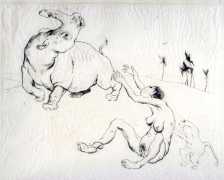 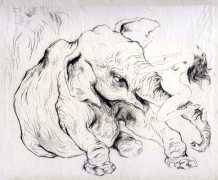