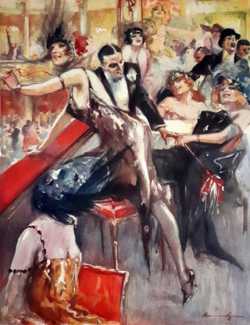 Ludwig Lutz Ehrenberger, also known as ‘Lutz Ehrenberger’, ‘Ehrenberger’, or simply ‘Lutz’, is another prolific and popular artist well-known in their time, but now almost forgotten. He grew up in Vienna, and at some point around the turn of the century moved to Berlin, where he must have had some form of art education, as by 1910 he was regularly producing artwork for popular magazines, and in 1915 was commissioned to illustrate a collection of popular soldiers’ songs, Mit Trommeln und Pfeifen (With Drums and Pipes). His quick, colourful, witty style was perfect for the many periodicals being produced in Berlin. 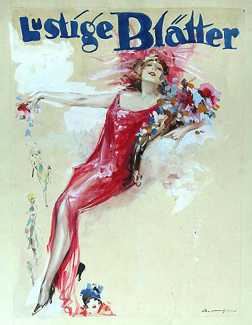 Ehrenberger’s first drawing for the enormously-popular weekly Lustige Blätter (Humorous Pages) appeared in 1910, and from then until the late 1930s he was a regular contributor, including many cover designs, mostly featuring young women in the minimal fashions of the time. His drawings also appeared in the short-lived radical magazine Der Komet (The Comet) in 1911 and 1912. Der Komet was remarkable for its championship of the rights of women, free sexual expression, and for merciless satirising of bourgeois complacency. 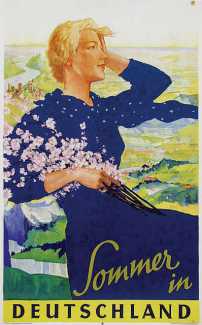 Ehrenberger was a versatile artist and graphic designer, who was as confident in the production of artwork for posters and advertising as he was in popular scenes of social and cultural activity and scantily-clad women. Each year from 1918 he produced a poster design for the Munich Fasching, the late winter festival for which the city is famous, and regularly created artwork for cultural and tourist organisations.

By 1922 he was well enough known for publishers to commission collections of Ehrenberger prints, including the Ehrenberger-Album of twenty coloured pictures, published by Berlin-based Eysler & Co. Three years later Rhombus Verlag produced Die Kunst des Verführens: Ein Handbuch der Liebe (The Art of Seduction: A Manual of Love), which was so popular it went into four editions. 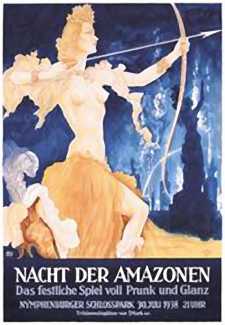 One of Ehrenberger’s last commissions was also one of the most controversial. In 1938 he was asked to produce a poster design for Christian Weber’s ‘famous Nazi glamour show’ Nacht der Amazonen (The Night of the Amazons). Ehrenberger’s poster reflects the amalgamation of militarism and sexuality of the stage show, depicting a lone Aryan archer. Combining danger and desire, the threat of her poised bow and arrow is offset by her statuesque naked body. It should be seen in the context of Hitler’s warning to the National Socialist Women’s Organisation in September 1934 that ‘neither sex should attempt to do what belongs in the sphere of the other’ – women dance and men fight. Just as the classical Amazons were subjugated for their transgression, this is a warning to uppity women in the Third Reich. We shall never know to what extent Ehrenberger was in agreement with those who commissioned his work, but he survived the war years with his life and reputation intact.

If you are interested in early twentieth-century German popular art, the University of Heidelberg has digitised Lustige Blätter for the years from 1899 to 1919, which includes many Ehrenberger illustrations. You can visit their collection here.