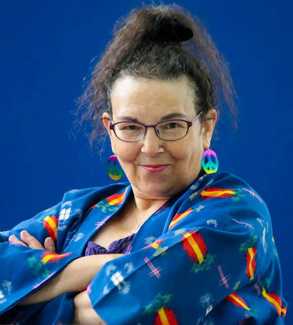 On her website, Melinda Gebbie describes her artistic journey as ‘a continuous document of fluid mind, body and spiritual states, seen through varied materials and storytelling imagery; a one-person journey through a kaleidoscope of words, feelings, growing awarenesses, and the ever-changing juxtapositions that the rules of time and flesh impose upon us’. That’s a big artist’s statement, but Melinda’s art and illustration work has explored these boundaries and depths in a way that very few others have dared to, especially when it comes to sex, power and passion.

She grew up in 1960s San Francisco, the perfect place for a talented young artist to be, and was introduced to the world of comics in the mid-70s. When the feminist Wimmen’s Comix started in 1972, Melinda knew that this was an art form that ideally suited her talents and passions; she started contributing to Wimmen’s Comix with their third issue, and went on to produce comic features and short stories for Tits & Clits, Wet Satin, and Anarchy Comics. In 1977 she completed her own solo book, Fresca Zizis.

Early in 1984 Melinda married California poet Adam Cornford, but the stormy relationship was short-lived and petered out when she moved to England to work on the animated film adaptation of Raymond Briggs’ post-nuclear illustrated book When the Wind Blows. When that was complete she continued to produce illustrations for American and British comics; she also became involved in an obscenity trial when Knockabout Comics, one of her main clients, was prosecuted by the British customs agency over the importation of ‘pornographic’ comics including Fresca Zizis. 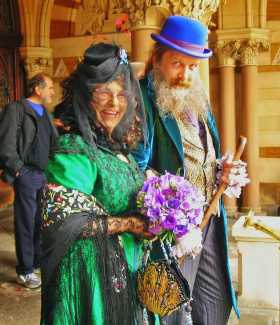 The big change in her life came in 1989 when she met Alan Moore, already well-known for his graphic comic books. He had recently started to produce work for Taboo, a small independent comic anthology edited by his former colleague Stephen Bissette, and it was in Taboo that the early work for Lost Girls, Alan Moore and Melinda Gebbie’s acclaimed graphic novel collaboration, first appeared. It took sixteen years to complete the complex detailed work on Lost Girls, Alan writing the text and Melinda producing illustrations, and during that period their relationship became ever more intimate both artistically and physically, a neat parallel with the profoundly erotic subject matter of the project. Both partners were no newcomers to complex relationships, Alan being well-known for having more than one partner at a time, and in 2007 they felt ready to cement their commitment in a typically colourful wedding ceremony.

Melinda continues to produce comic strips, illustrations and highly-colourful paintings exploring the great mysteries of relationship. As she writes of her work, ‘The same questions that plagued my early work in comics continue to fascinate me. What perpetuates the myth of absolute difference between man and woman? Why are mothers and daughters seemingly natural enemies? How do states of love and feelings of hatred shape our personal lives and distort our consciousness? Where do we look for peace of mind, clear thinking, and a heart free of muddled, entrapped fear and pain?’ In providing provocative interim visual answers to these questions she gives her audience plenty to think about.

Melinda Gebbie’s website, with many examples of her work to look at, can be found here. 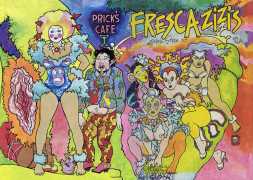 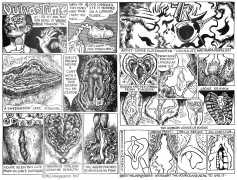 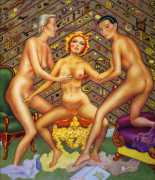 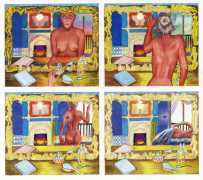 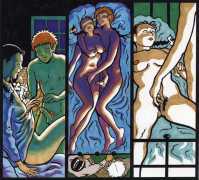 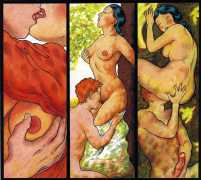