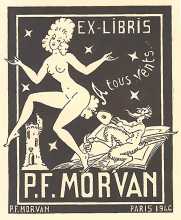 Paul-François Morvan grew up in Dinan, in the northwestern French region of Brittany, but like so many budding artists he found his way to Paris, in his case in 1919. His timing coincided with a growing market for ex-libris designs, bookplates for the growing number of ‘discerning’ nouveau-riches amateurs collecting limited edition volumes of what the French call ‘curiosa’. Over the next half century Morvan produced well over two hundred of them, becoming one of the best-known ex-libris artists of the period. As well as using his own name and the initials PFM, he often used the nom d’artiste DAN for his bookplates.

In addition to his ex-libris work, Morvan illustrated a number of books, the first being an edition of Robert Guy D‘Helle’s La geste du vase de Soissons (The Sign of the Soissons Vase) in 1937. In 1945 he wrote and illustrated a modern fairy tale, Le prince aux oeillets (Prince of the Carnations). Other editions illustrated by Morvan include Marcel Diamant-Berger’s L’éternel m’a dit (The Lord Spoke to Me) and Sylvain Bonmariage’s Le pêcheur à la ligne et les poissons (The Angler and the Fish). He also illustrated two decidedly erotic texts, Chansons de salle de garde in 1938 and a single hand-painted edition of Anatole France’s La leçon bien apprise (The Well-learned Lesson) in 1948 which was commissioned by the book collector A G Stainforth. 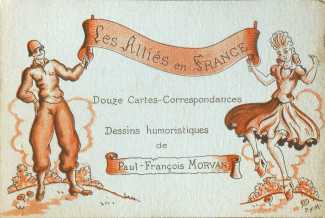