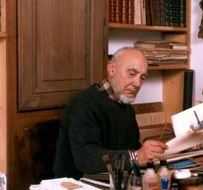 Noël grew up in Troyes in north-east France, and studied drawing in the Paris studios of René Lelong and Louis-François Biloul, then at the École des Beaux-Arts. His first interest was as a marine and military artist, but his skill as a book illustrator was what kept him the busiest. In 1927 he was commissioned by Éditions Kieffer to illustrate Balzac’s La connestable, and the following year was approached by Éditions Mornay for illustrations to Claude Farrère’s Thomas l’Agnelet and Flaubert’s Salammbô.

During his lifetime Pierre Noël illustrated more than a hundred works, including classic and modern literature, illustrated history and children’s books.