For such a talented illustrator, remarkably little is known about the Vienna-based artist Rudolf (Rudi) Keller. We know that he regularly created illustrations for popular magazines like Lustige Blätter, and produced three published portfolios of etchings. We have a record of him being married to Inge, and of three children including Günther, who also became an artist. And that is all.

His third and last collection was Ein Blick durchs Schlüsselloch (A Peek through the Keyhole), a set of six etchings privately published by Keller in 1931, which were more conventionally explicit than the earlier portfolios. 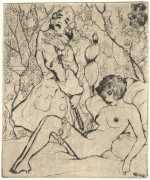 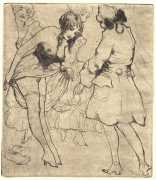