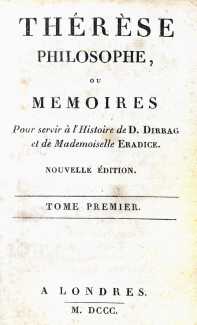 Thérèse philosophe (Therese the Philosopher) is a 1748 French novel ascribed to Jean-Baptiste de Boyer, Marquis d’Argens. Though it is mostly thought of as a pornographic novel, which accounts for its massive sales in eighteenth-century France, the novel is also an important vehicle for elaborating on the ideas of the influential French ‘philosophes’, the intellectuals of the enlightenment who wanted to apply reason to the study of history, science, politics, economics and social issues.

The narrative starts with eleven-year-old Thérèse being placed by her mother in a convent. Being a girl who is used to freedom and exploration, including that of her own sexuality, she falls ill and almost dies, but at the last minute her mother comes to rescue her. Now twenty-three, she becomes a student of Father Dirrag, a Jesuit who secretly teaches her the principles of materialism and anti-clericism. Thérèse spies on Dirrag counseling her fellow student, Eradice, at the same time preying on her spiritual ambition in order to seduce her. Through flagellation and penetration, Dirrag offers Eradice what she believes is spiritual ecstasy, but is actually sexual violence. As an interesting aside, ‘Dirrag’ and ‘Eradice’ are anagrams of the surnames of Jean-Baptiste Girard and Catherine Cadière, who were involved in a highly-publicised trial in 1730 concerning the illicit relationship between a priest and his student.

For all its debauchery, the work has some philosophical merit in its underlying concepts. Between the more graphically adult sections of the novel, the characters discuss important philosophical issues including materialism, hedonism and atheism. In a very modern take, religion is seen as a fraud, useful for keeping the the working classes in line. Thérèse philosophe draws attention to the sexual repression of women at the time of the Enlightenment, and to the exploitation of religious authority.

Now at the height of his career, Borel brings de Boyer’s text graphically to life.